The Anglo Welsh Cup heads it way back to Devon, safe on the Chief’s Bus. A tournament support by MJ Stevens Staff, Customers, Suppliers and Friends saw the season’s efforts pay dividends with a win over South West rivals Bath at the home of another South West team, Gloucester. A game which saw youngster Jack Innard score a brace of tries and the ever reliable boot of Joe Simmonds saw Exeter ease pass a wondering Bath pack. The game was watched by our Managing Director Louis Greenaway, pictured below, with Captain and Corporate Sales Manager Kai Hortsmann and avid Chiefs supporter Tom Reed. 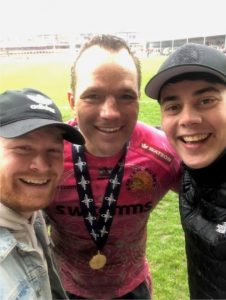