We have recently descended on to Exmouth Beach to play in the inaugural South West Beach Rugby Tournament. We teamed up with Sidmouth RFC using the talent that wont the Western Counties West League and Team Manager John Dunn alongside Exeter Chiefs Super Star Phil Dollman. The team wore the green of Sidmouth RFC with our branding on the front. The tournament was a packed out weekend on the sea front seen by thousands of people over the weekend. We finished up in the semi-final. The Tournament was won by The Chiefs Retirees. 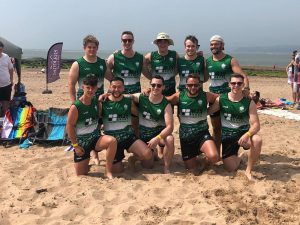